Virtual reality (VR) headsets are becoming more commonplace and are now being used for applications other than gaming and entertainment. Since VR headsets deliver audiovisual content, Lumen Optometric takes a look at whether or not VR headsets are bad for the eyes. 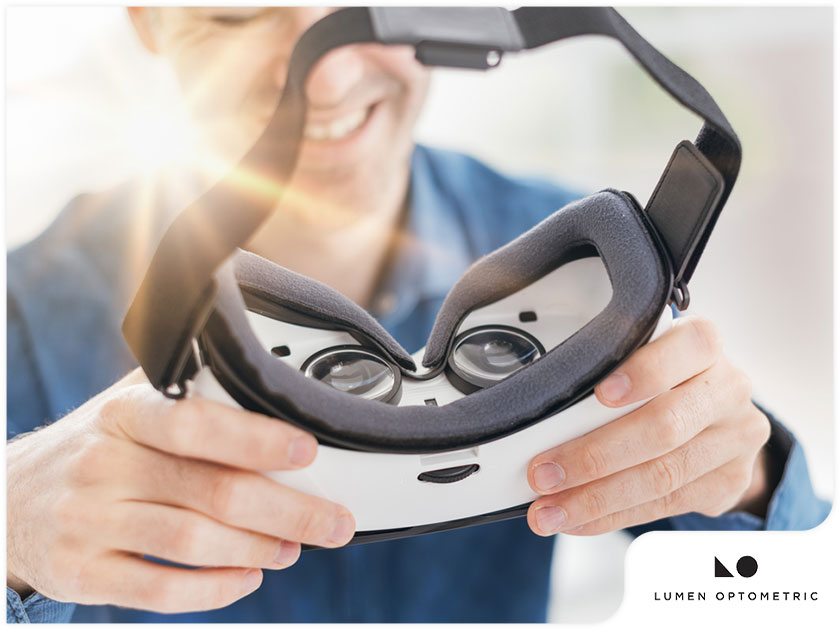 How Do VR Headsets Work?

VR headsets are head-mounted devices that consist of a display screen and stereo earpieces, as well as sensors and controllers that create an interactive and immersive experience. Putting on a VR headset shuts out the immediate surroundings, which means the user can only see the content projected on the display screen. Its sensors adjust the content orientation, which allows the user to interact with a virtual space from any direction. While mostly known for their gaming applications, VR headsets can also be used for work and education.

The Effects of VR on the Eyes

Similar to devices that deliver audiovisual content like TVs and smartphones, VR headsets present the same risks, including eye strain and fatigue, discomfort, and blurred vision. Studies have shown that the human eye tends to blink less when using digital screens. Blinking helps remove contaminants from the eyes and keeps them moist and a reduced blink rate can result in dry eyes. The eyes also tend to work more as the brain tries to reconcile the differences between virtual and perceived depths.

VR headsets also induce visually-induced motion sickness in some people. This “cybersickness” can persist long after the user has stopped wearing the headset, the symptoms of which include headaches, lightheadedness, difficulty focusing, sweating, and nausea. People who are prone to motion sickness or already have problems that affect their depth perception are especially susceptible to cybersickness.

Fortunately, there are things that you can do to help reduce the effects of wearing VR headsets. The following can also be helpful if your daily routine involves prolonged use of digital screens:

Lastly, visit your eye doctor regularly to prevent further eye problems. Lumen Optometric provides the best eye care services to clients in Sierra Madre, CA, and the surrounding communities in Los Angeles County. Give us a call at (626) 921-0199, or fill out our contact form to schedule an appointment.